Apple Falls Further Than The Tree 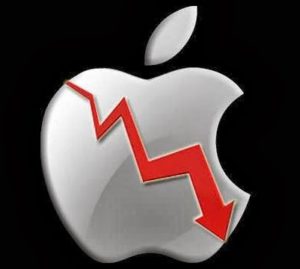 Recently, Apple’s value (which has reached a trillion dollars less than a year ago) has fallen by a staggering $450 billion. In other terms, Apple has lost an entire Facebook. That is more than most of us can comprehend, but what are the causes implicating this?

On Thursday (3 January 2019), Apple has made a readjustment to it’s revenue forecast which saw the share price fall by 9.96%. This is a complete nosedive, but again, what caused the readjustment? Tim Cook has blamed the interference of trading deals with China for the slowing down of sales in iPhones recently. There certainly is some truth in the matter, however that is not the greatest concern. There is however a slowing down in the tech world regarding smartphones, as Samsung has revealed that it is also suffering a slowing down in smartphone sales. Although Samsung does have a much wider variety in products that it will not feel the blow quite a strong as Apple. Apple has even given in, in letting users access their iTunes from their Samsung TVs. This is a bit concerning as it almost screams ‘desperate’ from Apple’s side as they never used to give in to other brands, especially Samsung.

Apple certainly have established a massive client base all over the world and their products work incredibly well together as an integrated set of machines. The moment however, that you do not have multiple Apple products, there are options out there that out perform Apple’s products by a long way. Developer computers, Gaming computers, Smartphones, all have multiple brands other than Apple and the products out perform Apple’s products in all aspects and the best bit is, they are much cheaper most of the times.

When a new iPhone comes out, the one release has a new look and new features, and the next year when all the competitors bring out new smartphone, Apple produces an ‘S’ version. The phone looks exactly the same, with a few minor features added. So where competitors have use the passed year to create a brand new smartphone, Apple stuck an ‘S’ on their old version and added a new processing chip (which no one notices the difference anyway).

Apple brings out features that no one thought of and don’t even necessarily even want or need, where other brands seem to get what their users want more and brings out those features. Since the S5 version of the Galaxy range, Samsung has produced waterproof smartphones. Apple has finally made a waterproof smartphone when the iPhone 7 came out. It took Apple 2 and a half years to catch up with this feature. Many may say it’s a useless feature, like why would your phone get wet and in most cases it is true, however accidents do happen, and when they do it is always nice to be prepared.

As mentioned in the video; Steve Jobs, founder of Apple, had a way of sticking to simplicity and things worked. There was clear progress in terms of the evolution of the iPhone and MacBooks. From the iPhone 6, 6s, 7 and 8 (that is 4 years), Apple has been selling the exact same design. Then with the iPhone X, they bumped up the price of the iPhone by 35%! Now they keep on selling the older version for the same price as when they were launched and overcharging on the new X (10) range.

With the newly exposed bug that lets callers listen in on your phone via FaceTime even when you have not answered your phone, this definitely does not go in Apple’s favour in terms of trust or buying in on their overpriced products. Apple does seem to have quite a product line lined up for the year to come, but with the minor and basic things not being fixed, that might not be enough to swing the market

With many of Apple’s competitors developing great products in terms of phones and then Xiaomi creating the integration part as well, Apple will have to easy up on the price and start focusing on keeping up with the times to stay ahead (or even to keep up with) the competition.